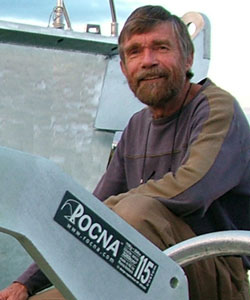 Say hi to Peter, designer of the Rocna. This sea-dog has been building, racing, and cruising sailing yachts since the early 1960’s.

In 1978, Pete walked away from his successful yacht production company Cavalier Yachts to go cruising with his wife, Josephine. 33 years and well over 100,000 nautical miles later, he’s still cruising on his current yacht Kiwi Roa, the result of over a decade of planning and design work.

A boat-builder by trade, Pete built Kiwi Roa over a five-year period to be his ultimate cruising yacht (her design philosophy matches that of the Rocna–bulletproof.)

15m (50′) long, she is built from 10 mm aluminium alloy plate (up to 25 mm in some sections), displaces 27 tons, and is designed to withstand the worst conditions Mother Nature – or man – can throw at her.

Pete, together with Jo and their son Craig, sailed Kiwi Roa from England to New Zealand during the period 1994 – 1998. Although extremely well set-up, Kiwi Roa experienced frequent problems when anchoring. Soft mud areas such as the English East Coast, the Chesapeake, and the Delaware Bay presented particular problems.

Pete had used every type of anchor known to man. Kiwi Roa carried a 110 lb CQR, an 88 lb Delta, and a 110 lb Bruce, but there was always a feeling of insecurity. So, in the New Zealand tradition of do-it-yourself, he built the first Rocna prototype, a 50 kg concept model which was tested during a circumnavigation of New Zealand. It endured hundreds of uses in conditions that included 70 knots on-and-off for ten days in Stewart Island, and 50 knots for two days in Akaroa. While other boats were having anchor trouble, Kiwi Roa did not move.

As word of the Rocna’s formidable holding power spread amongst the cruising community, other sailors started to ask Pete for a Rocna of their own. Rocna anchors are now available in over 40 countries worldwide.

Peter’s recent sailing has been in the Atlantic, both south and north. After several years in Patagonia and Tierra del Fuego, and expeditions to Antarctica and the South Atlantic islands of the Falklands and South Georgia, Kiwi Roa has been in South Africa and the western African coast before making the big jump to Newfoundland and Greenland. To find out more about Peter’s adventures, including comprehensive photo journals, visit his personal website at PeterSmith.net.nz.